With the ROFLEX, KTR launches a new shaft coupling according to DIN 740 which is characterised by its short design and its service-friendliness. In addition to power transmission, the torsionally flexible coupling compensates for misalignments and dampens torsional vibrations. The ROFLEX is available in two designs and currently in seven sizes for torques from 65 to 790 Nm. Another five sizes will be added by the middle of 2022 and extend the performance range up to 5,000 Nm.

The ROFLEX is a short shaft coupling in which the input and output shafts can be pushed together between 3 and 6 mm, depending on the size. The torque is transmitted via elastomer packages, which at the same time compensate for misalignments and dampen shocks and torsional vibrations. Should the elastomers fail due to extreme loads, the fail-safe coupling continues to hold the torque. 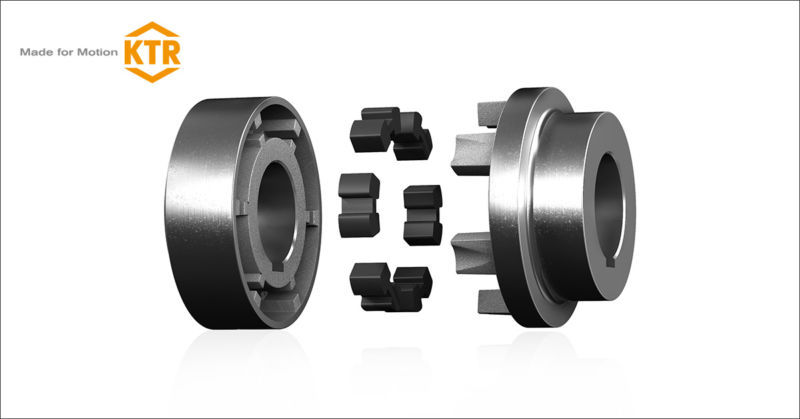 ROFLEX N; The use of the photos is free of charge for editorial purposes (© KTR Systems)

The ROFLEX is made of grey cast iron and is available in two types: In type N, both the pocket and the cam part consist of standard hubs. In the SH SPLIT design, on the other hand, the cam hub is split. Here, the hub is specifically and mechanically separated into two halves by “fracture cutting”, or “cracking”. The resulting fracture surfaces centre both hub halves precisely with each other, which makes incorrect assembly almost impossible. The hub halves can be mounted on block, the fit of the bore remains unchanged. Depending on accessibility, the hub can be pushed on for assembly. Or the two hub halves can be joined around the shaft; thus the split hub can be radially installed and removed without dismantling the adjacent units.

“As a rule, we recommend that our customers fit the SH-SPLIT hub onto the motor shaft. This makes the coupling easier to assemble overall and in case of service there is more space available, for example to exchange the elastomer packs”, says Michael Brüning, Product Manager at KTR. “In addition, it allows the user to carry out the direction of rotation check on the engine without the coupling hub.”

The ROFLEX has been assessed and confirmed according to the European ATEX product directive 2014/34/EU and is suitable for use in potentially explosive atmospheres. Core industries are pumps and compressors; other areas of application in general mechanical engineering are gearboxes, fans and belt drives.

KTR Systems GmbH develops and produces mechanical couplings, brakes, coolers and hydraulic components for mechanical and plant engineering. KTR was founded in 1959 in the Westphalian town of Rheine and employs more than 1,100 people worldwide, almost 500 of them in Germany. The global network comprises 24 subsidiaries and 90 sales partners as well as production sites in Brazil, China, Germany, India, Taiwan and the United States.

This website uses cookies and third party services to ensure that you get the best user experience. Read more ACCEPT